Earlier this month, my teammates and I attended the 2019 Net Inclusion conference in Charlotte, North Carolina. As the Government and Community Affairs team (formerly known as the “Community Impact Team”) for Google Fiber, we are responsible for building and investing in partnerships that help narrow the digital divide across the Google Fiber footprint.

The gathering, organized by the National Digital Inclusion Alliance (NDIA), provided a valuable opportunity to listen and learn from digital inclusion leaders on the front lines of improving their respective communities. We also had the chance to see the progress of the broader digital inclusion movement --a movement that is bigger than any one program, strategy or organization.

Throughout the conference, dozens of digital inclusion leaders took part in lightning round sessions featuring innovative programs from across the country. From leveraging technology to expand educational opportunities across the world to the development of low cost digital literacy evaluation tools , our team was inspired by these innovative approaches from community-based practitioners. In fact, it was during the lightning rounds of last year’s conference that we first discovered Libraries Without Borders’ Wash and Learn Initiative . Since then, we have kicked off a partnership with Libraries Without Borders to pilot their program in San Antonio.

We were also excited to see the announcement of the 2019 Charles Benton Digital Equity Champions. Honorees included Casey Sorensen, CEO of Minnesota-based PCs for People, and Munirih Jester, Digital Inclusion Program Manager for the San Antonio Housing Authority. Munirih began her role as one of the very first NTEN Digital Inclusion Fellows, a program Google Fiber co-founded with NTEN in 2015 and that is now in its fifth cohort. These champions manage programs aimed at reducing the digital divide within their respective communities.

Many thanks to the NDIA team for organizing another successful event, the Charlotte Google Fiber team for hosting a fun-filled reception, and local digital inclusion leaders for opening your doors to Net Inclusion visitors.

We know the digital divide remains a persistent challenge — and that none of us can solve it alone. Google Fiber has learned a lot about digital inclusion each year since our launch in 2012; and the conference made clear that the digital inclusion ecosystem continues to grow and get stronger. We continue to learn from leaders across the country working hard to get more of their neighbors connected, and we look forward to chipping away at the divide right alongside them. 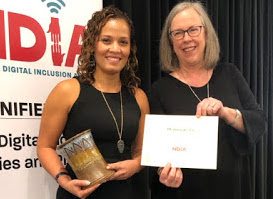