Demand for superfast Internet is at an all-time high. The White House has started new initiatives to encourage faster Internet, while local companies like Kansas City’s Fuller Creative are relying on gigabit speeds to grow. And Americans are signing up for gigabit Internet at a growth rate of 480% each year. While much of the United States still lags behind the rest of the world in Internet speeds, cities like Kansas City—where Fiber started—rank amongst the fastest cities in the world. We want to see more U.S. cities at the top of that list.

Today, we’re inviting three more cities—Irvine, CA, Louisville, KY, and San Diego, CA—to work with us to explore bringing Google Fiber to their communities. Our next step is to begin a joint planning process with city leaders, just as we did when we began working with nine metro areas last year. 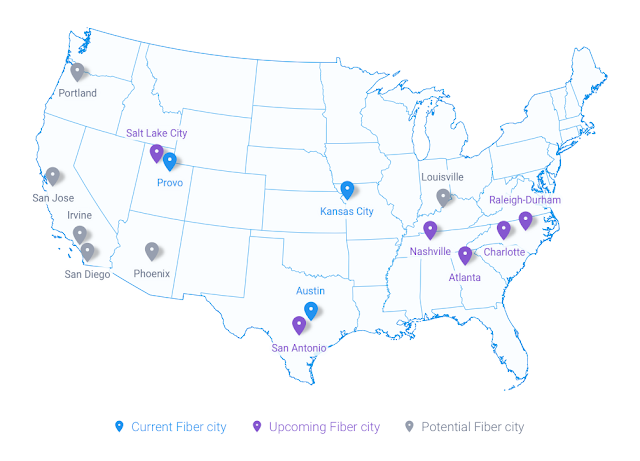 Irvine, Louisville and San Diego will jointwelve metro areas where we're connecting users, designing and constructing new networks, or exploring the possibility of Google Fiber.
To kick things off, we’ll work with Irvine, Louisville and San Diego to conduct a detailed study of factors that affect construction, such as local topography, housing density, and the condition of existing infrastructure. Meanwhile, cities will complete a checklist of items —such as providing a map of utility lines—that will prepare them for a large-scale fiber build.

We’ve seen that this planning process is helpful, both for Google Fiber and city officials—working together, we can take a massive infrastructure project and break it into manageable pieces.

Once we complete this planning process, we’ll determine if we can bring Google Fiber to Irvine, Louisville and San Diego. Every city is different and will move on a unique timeline, so we’ll keep in touch with residents about our progress along the way. And regardless of whether Google Fiber comes to the region, this process gives cities a head start in welcoming any gigabit provider to the area.

It’s clear that Irvine, Louisville and San Diego have strong leaders at city hall, who are passionate about bringing fiber to their communities and making the Internet more accessible for everyone. From Code Louisville to San Diego’s startup scene to Irvine’s collaborative workplaces, these cities are growing tech hubs with entrepreneurial cultures—great places to show us what’s possible with gigabit speeds. We’re looking forward to working together as we explore bringing Google Fiber to these communities.