Pardon Our Dust in Austin

Hey Austin, have you seen us around town lately? Our Google Fiber crews are now in the process of building a high-speed network that will one day include more than 3,000 miles of brand new, state-of-the-art fiber optic cables — enough to stretch across the longest Interstate highway in the U.S. (or from Boston to Seattle). Since we don’t use any existing copper cables, we’ve been planning and designing our network from scratch. Today we have a detailed network plan in place and our crews are hard at work constructing the network, starting with the core infrastructure that will form the foundation of Google Fiber in Austin. Over time, our network will grow to thousands of miles of fiber, stretching through underground conduit as well as across utility poles. That’s why we have crews that specialize in both underground and aerial construction — here’s a peek at what they’re doing today. Our underground crews operate powerful drills that can tunnel through Austin’s limestone, guiding a bore head through the earth to create an underground path for our conduit, then running fiber through the conduit. While we wish we had x-ray vision (we're working on it!), our crew members work hard as a team to avoid existing infrastructure and utilities, calling in “locates” with Texas 811 and using everything from detailed city diagrams to sonar detection to help. Meanwhile, aerial crews are doing work across thousands of Austin utility poles, reconfiguring communications and power lines to ensure we have room for our fiber. This work allows us to use existing infrastructure and avoid additional underground construction, which tends to be more disruptive to the community. 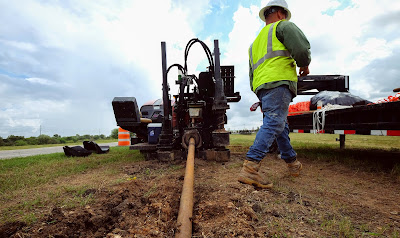 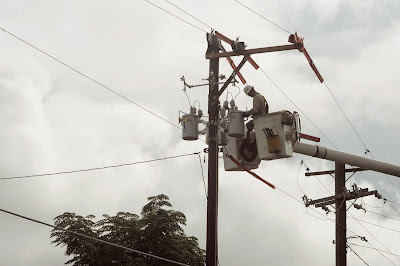 Making room for Google Fiber on Austin's utility poles
Underground or in the air, pardon our dust — in order to bring Google Fiber to a city, a whole lot of heavy lifting has to happen! We are working to build our fiber network in Austin with as much efficiency and as little disruption as possible, but this size of a construction effort is bound to affect a few Austinites day-to-day. Longer term, we hope this infrastructure will play a big role in the city’s future. Gigabit Internet speeds will open up new possibilities for the way we use the Web, and Austin is well on its way to showing the world how it thinks big with a gig. Posted by Mark Strama, Head of Google Fiber, Austin