A World Record for Provo

Kissing puppies and llamas, painting bricks for a local art project, shooting free throws at the rec center, donating canned goods, and performing on a karaoke stage: all of this (and much more!) was part of a historic day this past weekend in Provo, Utah. Google Fiber joined the broader Provo community in an effort to shatter the official world record for the largest scavenger hunt, as determined by Guinness World Records. And shatter it the city did — the previous record of 924 is history, with a total of 2,079 “hunters” finishing the Passport to Provo challenge on Saturday, September 13. Along with Provo Mayor John Curtis, Downtown Provo and Cotopaxi (a local outdoor gear and apparel company), Google Fiber supported the event to help bring together thousands of Provoans to explore and celebrate their downtown. 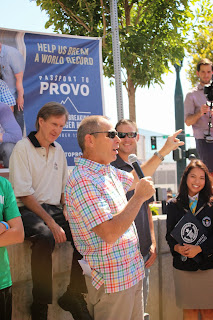 Mayor John Curtis rallies Provo hunters while Guinness World Records looks on
Under the watchful eye of Annie, our judge from Guinness World Records, teams of hunters — groups of families, friends and students — filled Provo streets, businesses, nonprofit organizations, community parks and historical landmarks to complete the challenge. Hunters completed at least 15 tasks from categories such as Downtown Culture, Quirky and Fun, Outdoor and Adventure, Community Service and Local Business. The event ended with a party with performances by local Provo talent. Watch this video to see all the fun and don’t forget: this week is the last chance for anyone in a Provo fiberhood to get Fiber for $30 — sign up by September 20th. After this wave of sign-ups and installations, our construction fee will increase from $30 to its usual $300 at our next sign-up opportunity. Posted by Devin Baer, Field Sales & Marketing Manager, Google Fiber